I’ve selected 3 stand-out charity ads from 2018 which have each delivered creatively and used media partnerships to their advantage.

In first place, it has to be Iceland’s ‘Say hello to Rang-tan film’.
A great partnership and a timely focus on the issue of palm oil. Using Greenpeace’s film narrated by Emma Thompson, this is the surprise most watched Christmas ad ever online. Iceland’s launch was very ‘John Lewis’, supported by their own official Orangutan Plush toy on sale and other marketing ideas, like the use of a realistic animatronic orangutan lost on the streets of London, helping to highlight the issue. The ad was banned for broadcast by Clearcast for being too political, which was a PR blinder for Iceland, and helped drive interest in the issue of deforestation and the effects on habitats and wildlife in the production of palm oil. There was even a consumer petition to get the ad unbanned.  To Iceland’s credit they have decided to remove palm oil from all their products – a great combination of PR, social media and experiential marketing.

In second place,  the Samaritan’s ‘Small Talk Saves Lives campaign’.
Another educational and inspiring film about the issue of suicide on the rail track by the Samaritans. The hairs on the back of the neck moment is when you realise who the narrator of the film is – Sarah, who herself was contemplating suicide at a station when a passer-by took the time to check on her. We are told in the film that a little small talk really does save lives; for every life lost, six are saved by others taking small actions like this. With 6,213 suicides in the UK and Republic of Ireland in 2017, hopefully this campaign will show that people can make a difference. A great use of partnerships with the British Transport Police and Network Rail and a fine social strategy to spread the film organically on Linkedin and Twitter.

And finally, on a lighter note – Save the Children’s Jumper Day promotion.
This poster on the underground is funny and simple. Save the Children have made the Christmas Jumper Day stand out, quite literally by poking you in the eye. By signing up and donating £2 you can make a child’s future better. I hope this ad has worked well for them, and again good to see media partnerships with Amazon and Visa making this possible. 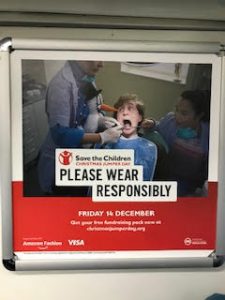 Wishing you all a positive, creative and healthy 2019.