I am a big fan of schools that take their Science Week or Green Week seriously. As a Trustee of the Marine Conservation Society, I’ve just been into the excellent Lee Common Church School and spoken to them about the marine environment. 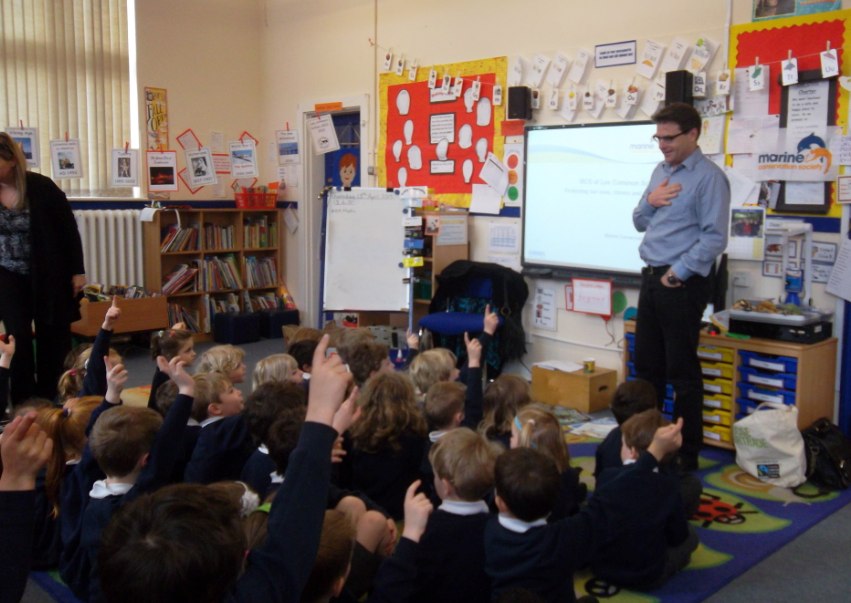 I talked to the whole school (well it is only wee with 48 children from reception to year two) about the challenges facing our seas. We also spoke to a slightly bigger group at The Beacon of 450 boys. I am pleased to say that £800 was donated and Lee Common adopted a turtle through MCS.

They asked great questions and were amazed by the scale of things like the Basking Shark (which grows to an amazing 11 metres in length and yet only eats the smallest of things in the sea). We looked at the effects of pollution – and how one lucky seal had a happy ending, which isn’t always the case. Five out of the seven global turtle species come to the UK shores (including the Leatherback, Green, Loggerhead, Hawksbill and Kemp’s Ridley) and often confuse their favourite tea of jellyfish with plastic carrier bags. We saw how similar plastic bags look to jellyfish and the other problems caused by the massive rise in sea litter.

We looked at the abundant sealife with so many surprises including the Cuckoo Wrasse, which changes from a female to a male, causing quite a stir. And the biggest ever

Leatherback washed up in Wales, at ten times the weight of an adult.

We looked at some of the common things we see on our beaches and how it’s good to know a few of these including the seaweed which looks like Lettuce, as we are never further than 70 miles from the sea.

We also considered what inspires us about nature. And how a passionate interest can turn into a lifelong obsession (or even a career, in many cases).

We discussed the importance of well-managed fisheries. With over 85% of fish stocks at their limits, we looked at the fish which should be avoided. And finally we discussed the role of government in protecting our seas – of which only 0.006% are currently protected. And the Marine Conservation Society, who are pushing government to recognise 127 Marine Protected Zones (which would make up 27% of our seas). But this mean old government is only considering 40 of the zones.

I hope our school Science Week and Green Week children go on to be more inspired future leaders and do a better job of protecting our seas.